I downloaded the old ielts test and its keys, one of the questions asked you to describe a bar chart, and there were 3 different pieces of data given on the chart: 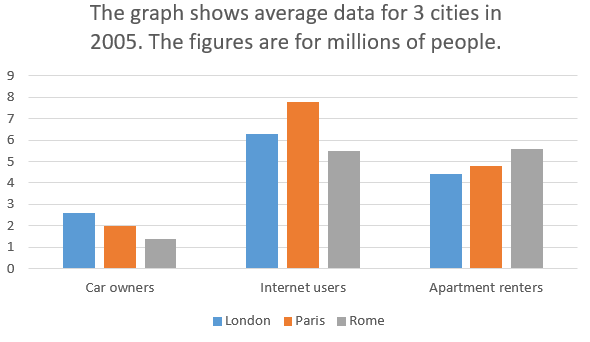 In its key for this question, there was a line which I thought it was weird.

"Internet users was the highest statistic."

Is it supposed to use the word "were" instead?

Or "Internet users" was some kind of singular agreement for this case?

One way of describing such language use is to wrap a word or phrase:

So while the data is describing the number of individual Internet users etc., the statistics compare three singular groups that happen to be labelled ‘car owners’, ‘Internet users’ and ‘Apartment renters’.

A classic example of such verb use involves “the family is” and “the family are”, depending on whether we consider the family as a single unit or a group of individuals.