This site has a number of questions and answers (e.g. this question) on the use of the third-person feminine pronoun (“she” or “her”) as a substitute for specific things like ships and hurricanes and even whales (“thar she blows!”).

In certain rural dialects in the United States, however, one hears the third-person feminine pronoun her used as what I believe to be a dummy subject, a general catch-all for something that may not be defined. Probably the most common example is an expression of resolve:

Let’s get her done.

This is heard most often as “Let’s git ‘er done.”

In this case, her appears to be a substitute for it, because the it refers generally to a task or mission, some form of undertaking that must be completed satisfactorily. Yet whatever “her” refers to is not really as specific as a particular ship or whale or whatever. In any event, it’s not something you can point to and say “There it is” or “There she is.”

My question: Are these two usages ultimately the same, or is the the above-described usage a special case? If so, is it genuinely a substitute for the dummy subject it? If not, what is it?

The feminine objective pronoun in get her done does not have a female animate or even a noun as an antecedent, but an action:

“If he don’t get her done tonight we’ll be ter work bright an’ early in th’ mornin’. You go to the land office an’ enter the claim an’ I’ll start the plow.” — The Florida Agriculturist., 19 Aug. 1896, orig. Detroit Free Press.

This is a conversation between two characters, whom the author terms “typical Westerners,” who plan to cheat the author and her husband out of their western Kansas farmstead by filing a land claim before they do. The her refers to the husband filing a claim that evening, which would thwart their plans.

All other cases of inanimate she occur when someone — almost always male — metaphorically ascribes sentience or personality to an inanimate object — a ship, car, motorcycle, engine, etc. — and uses feminine pronouns to talk about it. In a more formal register, countries were personified as feminine well into the 20th century.

Elisha Wells’s deposition was taken at New York on the 19th of December, 1829. He says, “Mr. Watson used very great exertions to get her ready to launch in the fall of 1813, for he often said he had engaged to get her done, and delivered to the agent at New York, that fall, or as early in the spring of 1814 as possible.” — House Committee of Claims, 10 May 1836.

This suggests that rather than being a unique usage in colloquial English, get her done started out the same way. But the semantic accent has shifted from the personified noun as receiver of the action to the action itself. The following sentence, describing the rush to complete construction for the 1884 World Cotton Centennial and World’s Fair in New Orleans, shows how this could occur:

“Will you get her ready ?” I asked. “Get her ready? We have fifteen hundred hammers driving every day. Fifteen hundred thousand nails every few hours will get her done mighty soon, now.” The buildings are a rifle-shot from the banks of the Mississippi. — Anderson Intelligencer (SC), 6 Nov. 1884.

What is the antecedent of her? The entire exposition? What’s topical in this sentence, however, is that its buildings are being rushed to completion, i.e., an action. The antecedent is also far less specific than the particular ship being discussed in the second example. When the accent fully shifts to completed action, an antecedent is superfluous.

Get ’er done is also a catchphrase of “Larry the Cable Guy,” the stage persona of Daniel Lawrence Whitney (born Pawnee NE), who affects an Inland South accent in his comedy act. 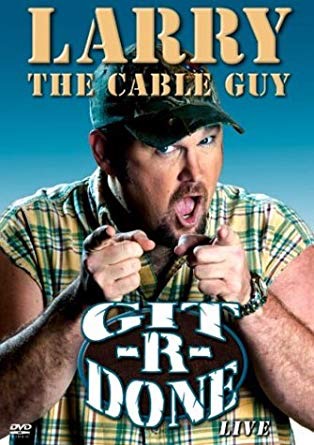