I have been looking in OED for a history that makes sense, yet, I just find crumbs, and I can not piece the history of this term. I am hitting a dead end researching the greek term to censor, named λογοκρίνω

According to Oxford English Dictionary the word censure, n., is first documented in use in

A Roman censor, formerly just called a censor was The title of two magistrates in ancient Rome, who drew up the register or census of the citizens, etc., and had the supervision of public morals.

In the same entry as censure, definition 5 explores, the concept further.

See Screenshots of the OED entries for all the details, and referenced material.

I have found an etymological account that carries the Latin verb censeo (a probable root of censor and related terms) back to Proto Indo-European. Etymological Dictionary of Latin and the other Italic Languages
by Michiel de Vaan includes the following entry: 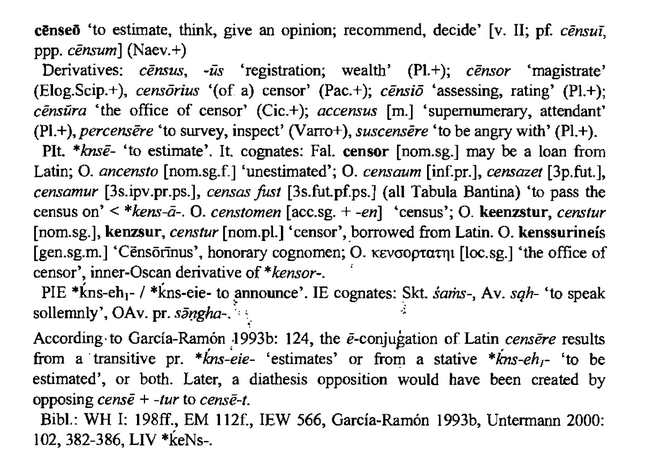 Rather than going to Greek, de Vaan goes to the Proto-Italic *knse-; the star denotes that it is a reconstruction based on comparative evidence from related languages, like Faliscan and Oscan. Wiktionary presents some of the other cognates and hypothesized roots in an easily readable format here.