What countries is “early mark” used in? It means being let out of something, typically school, early.

onelook.com only reports it being mentioned in Urban Dictionary, and it doesn’t have information on what varieties of English use it.

Google ngram isn’t very useful – too many uses of early mark without it having the meaning above.

Oz Words is even claiming that it’s only used in some parts of Australia, while Superlinguo says its reach extends as far as New Zealand.

Is “early mark” only used in Australia and New Zealand?

I’ve never heard it in the UK, or from elsewhere.

Here’s are three examples of how it’s used, from Superlinguo:

Searching for the phrase on Twitter Map (“See and visualize twitter users tweets overlayed on a map”) only gives three positive results, all from Australia:

Looking at early usage, an early mark was something that was earned in return for good results. Here’s the October 2012 draft entry from the Australian National Dictionary Centre. 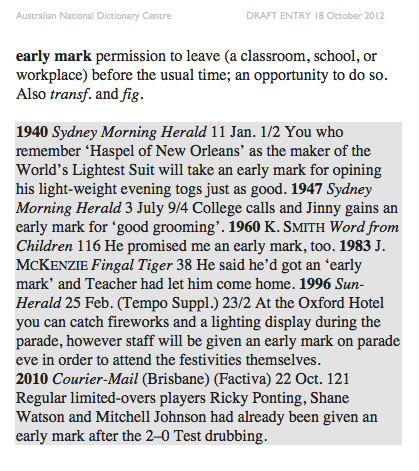 Dear Uncle Toby,
I am sending a coloured picture for
Ihe competition. I had a test on
Friday and received 90 per cent, in
dictation and 87 1/2 per cent, in sums.
I also received an “‘early” mark. It is
raining down here. I have a poisoned
foot. — Your unseen niece.
BEV. MILLS.

Central’s schoolteacher
forward Cec Fields has
some fans already. Saw
one little chap offer him a
chewing gum as he left the
field at half time. Warrant
an early mark, Cec?