In most English verbs, there is a consistent pattern in the conjugation of present and past tense. For past tense, the same inflection is used for each grammatical person, but in present tense, third person singular stands apart from the rest.

For example, with run:

There is an exception, which is To be. The pattern of unique conjugation for the third person singular present tense can be seen in this chart, along with the irregularity of to be. 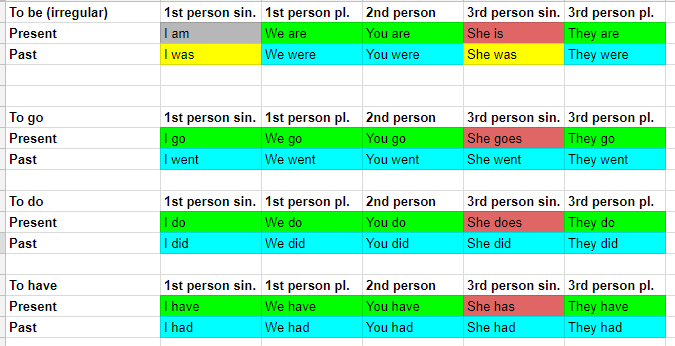 Setting aside to be (at least for now), is there a logical or etymological reason for the unique conjugation of the third person singular present tense?

As this is a very broad question whose full answer merits several written
books, I ﬁrst present a brief orientation and outline of how we got here today, with pointers to more detailed material.

Closely related to this question are questions like these, some of which you may have actually been asking about indirectly:

In those questions as well as in the one which I believe was asked, synchronic analysis fails to provide a satisfying answer, or really any at all in most cases. Instead one must examine the language diachronically to draw out a sensible answer, and a full treatment of that answer must reach back over six millennia.

An individual word in a synthetic language combines several bound morphemes
where each little internal piece adds something to the word’s overall
meaning. Morphological inﬂection can occur via aﬃxes (give > giving, ox > oxen, walk > walked), via
sound changes of vowels or consonants (give > gave, shoot > shot, man > men, mouse > mice, this > these), or via both (brother > brethren, swell > swollen, give > gavest).

Today’s English is for the most part an analytic language. For meaning, we
rely far more strongly on ﬁxed word-order and on little “function” words (including
auxiliary verbs, articles and other determiners, conjunctions, and prepositions) than we do on
synthesis via inﬂectional morphology the way synthetic languages do.

At the same time, English still has a few inﬂections left in it thanks to its
ultimate derivation from a long genetic line of highly synthetic languages stretching back over 6,000 years. We can trace English’s ancestors all the way to the prehistoric (read: unwritten)
Proto-Indo-European (PIE) language of our distant ancestors. That language
was strongly synthetic in all its open word classes, including in its verb
forms.

One distinctive PIE verb inﬂection that occurred in certain verbs’ third-person present
singular conjugations was *‑t or *‑ti. This became in prehistoric
Proto-Germanic
*‑di or *‑þi, in Old
English
‑(e)þ, in Middle
English ‑(e)þ, and in
Early Modern
English
the ‑(e)th of he liveth, which passed quickly enough into the distinctive
inﬂection you’ve asked about, the ‑(e)s form of he lives or he itches in today’s
English.

PIE third-person singular inﬂections also produced forms like German
er bleibt, Latin manet or cōnstat, Old French il remaint, and
although you can no longer normally hear it pronounced in speech, also in the
imperfect il restait of today’s French (but no longer in its present
tense sauf in certain relics such as subjunctive qu’il soit for “that he/it should be”).

Old English was a much more synthetic language than Middle English was, which saw dramatic reductions in inﬂections as the language transitioned to
an analytic one. There are several proposed explanations for why this happened, but that’s a whole nother topic with its own lines of investigation. Suﬃce it to say that Middle English was a furious time of mergers and acquisitions that saw as sweeping changes to the grammar as to the lexicon.

Similarly to how Middle English remade synthetic Old English analytically by reducing inﬂections across the board,
Early Modern English verbs did enjoy more conjugations than today’s English does, but
these again underwent rapid evolution. From the Wikipedia article on that topic
we read:

During the Early Modern period, English verb inﬂections became simpliﬁed
as they evolved towards their modern forms:

I reckon that that’s as detailed an answer to a rather broad
question as one dare get here.

I in passing note that English does
retain a single, unique inﬂectional distinction in the past indicative’s singular was versus its plural were (which is also the past subjunctive irrespective of number). Verbs other than be are no longer so marked.

And {‑Z₁}, the English third person singular present tense suﬃx —
one of the 8 inﬂections left in English,
and one of three that all use /z/, /s/, and /əz/ — is the only mark of
present tense around (everything else can be taken for an inﬁnitive, and
often is in nascent Englishes). So that suﬃx, and the subsequent worry
about “is XYZ singular or plural?” becomes a status symbol, like whom,
and is often mistaken and frequently omitted. That’s the way the cookie
crumbles, etymologically speaking.

When John writes {‑Z₁} using an archiphonemic {Z}, what he means is that
that morphological inﬂection ends up being pronounced in three slightly diﬀerent ways depending on its surrounding phonologic environment:

Moreover, we use that same {Z} archiphoneme for three of English’s eight
remaining inﬂections:

All three of these follow the same pronunciation rules to
translate archiphonemic {Z} into actual phonetics. (Please don’t worry about
the spelling; spelling is merely an immaterial side-eﬀect of writing technology, and so
shouldn’t be paid any attention to here since we’re talking about language not technology.)