Such does not seem to be the case, though, when me precedes the who. We instead treat me, in this instance, as a singular non-first-person subject: “It seems to me, who never knows anything, …”, “She kisses me, who has wanted her kiss for so long”, etc. These examples are awkward but replace the italicized verbs with first person present form (know, have) and it gets even more awkward.

To make sure this isn’t just a personal grammatical tic and to not rely on my ear only, I went to Google Ngrams: 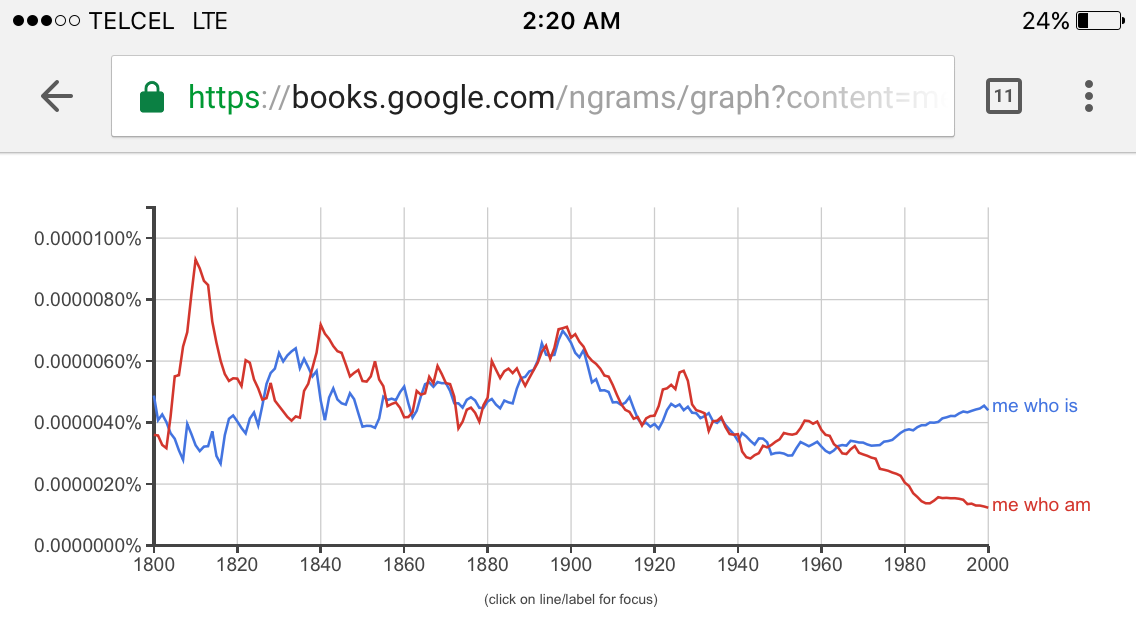 I searched with the verb to be because it is the most easily distinguished by person; with other verbs it would be difficult to differentiate first person singular and first person plural mes—as in, whether the me is a part of a group or not.

It appears that people have said both rather equally since the mid-1800s—though even before that there wasn’t consensus—and then the non-agreeing took off in the 1970s. (I am well aware there might be another explanation of this graph and these patterns, but I haven’t identified one.)

Why does “me who” take a non-first-person singular verb form (aka an -s)?

As you said, the examples listed with “me who is” sound bad to me. I’m not sure I would characterize them as acceptable, or say that sentences like “It seems to me, who never knows anything…” have exactly “taken off”. But there does seem to be a real shift upward, and an even clearer shift relative to “me, who am…”-type sentences.

Compared to sentences with “he who is”, or even “him who is”, we see that neither of the first-person options is used much:

A few alternate structures I can think of that might be showing up here for “me who is”:

I found a few examples of the kind of usage I’m thinking of from Google Books.

I can’t imagine “who am” was ever acceptable in sentences of this type in modern English, so if use of “me” as a noun has increased, this would bias the chart. And it does seem like this usage has increased (although interestingly, it doesn’t appear to have increased much more quickly than the usage of nominal “I”: “the me who is” vs. “the I who is”).

We could filter this out from the Ngram Viewer to some degree by subtracting examples of “the me who is” and “_ADJ_ me who is”. (The latter actually doesn’t work since you can’t use part-of-speech in 4-grams, so I substituted “_ADJ_ me who” as an approximation.) But these seem to have a fairly small contribution to the prevalence of “me who is”:

Cases where the “who” is actually attached to another noun phrase:

I don’t believe the Ngram viewer has any way of determining pronoun reference, so I think the above structures would all show up for “me who is”. Unfortunately, I don’t know how to estimate their prevalence.

Interestingly, I found one case where Ngram only has “me who is” and no “me who am”, but it is still less prevalent than the variant with “I who am“. It is the “it-cleft” structure “it is _ who _”:

The cleft structure seems to me to be a special case since it’s likely speakers’ judgments are influenced by the presence of the pronoun “it”.

But even if we subtract “the me who is” and “it is me who is” from the Ngram viewer, it still shows an increase for “me who is” (and a drop in “me who am”):

I would guess that this does reflect a shift in how speakers handle sentences of the “It seems to me, who never knows anything…” type. As BillJ says, it seems likely that this is influenced by the behavior of noun phrases followed by “who”, which normally take third-person agreement even if the noun phrase is co-referential with a first person pronoun (e.g. “I am the one who is…”)