In the area of which I live, there is a certain word we use to describe somebody that is naughty, or bad, in a joking/lighthearted manner. I do not know how to spell the word, and every attempt to find it on Google led to no accurate results.

The word sounds like ‘Nixee’ with a hard e at the end. It might be spelled Nixy or Nixie.

We live in the middle of Pennsylvania Dutch and Amish country. The word is exceedingly common around these parts and was interested in the history.

My question is what is the history of the word ‘Nixy’ and is it commonplace among other parts of the United States?

All sources I could find suggest nixie (variously spelled) comes from German, which accounts for its concentration in Pennsylvania and among or around Pennsylvania Dutch speakers. It is essentially unknown to American speakers outside that community¹.

The most detailed and plausible explanation I found, though the source is far from a linguistic reference, is The Pennsylvania Dutch Alphabet, by Chet Williamson (first published September 15th 2007 by Pelican Publishing Company).

Here’s the page that caught my eye, the entry for N: 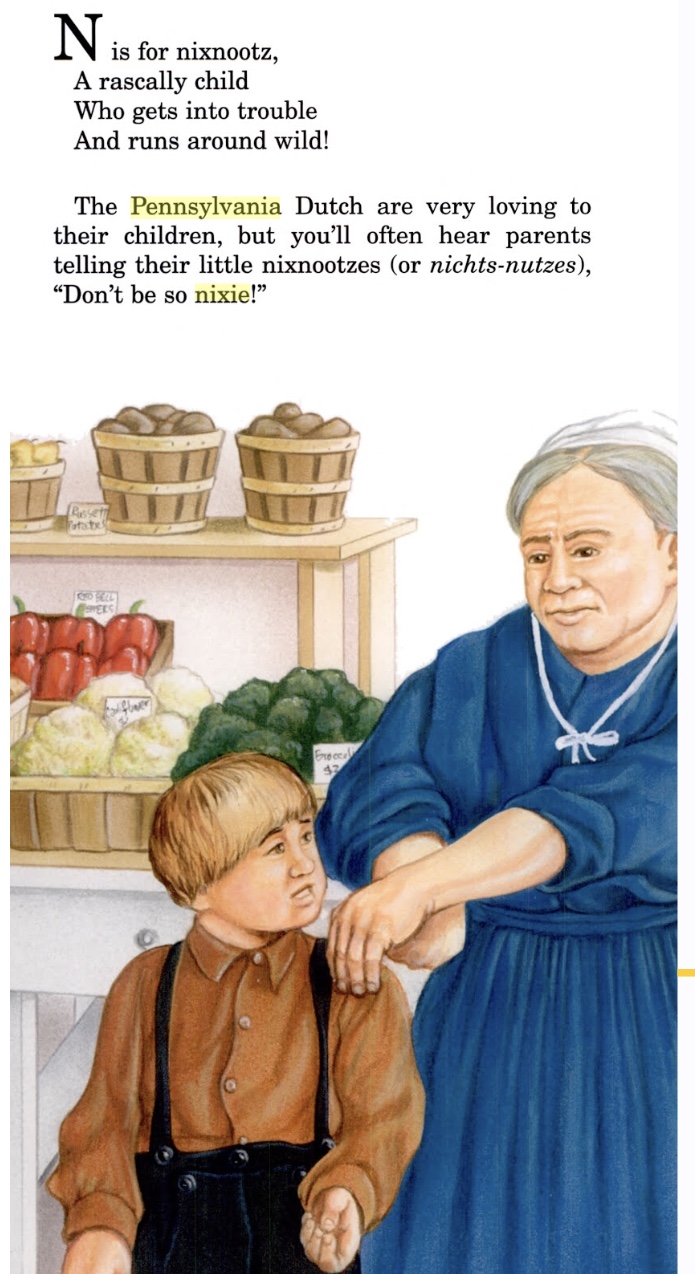 ℕ is for nixnootz
A rascally child
Who gets in trouble
And runs around wild!

The Pennsylvania Dutch are very loving to their children but you’ll often hear parents telling their little nixnootzes (or nichts-nutzes), “don’t be so nixie!”

So the theory held out here is that nixie, as a noun or adjective effectively synonymous with naughty, is a shortened form of nixnootz, derived from German nichts-nutzes, which translates to (per dict.cc):

jdm. nichts nutzen
to be of no benefit to sb.

ie, a good-for-nothing, someone whose idle hands look like ideal real estate for the Devil’s next workshop.

As I said, this is hardly a scholarly work of linguistics, but the word’s inclusion in this particular primer does suggest (a) the work is unique or particular to Pennsylvania Dutch country and (b) it would be familiar to young children of that community (I believe such books are usually targeted at children around 4-5 years old).

However, in search of a more scholarly source to bolster this theory, I also found some discussion of this word in an episode of the podcast A Way with Words called “Doppick and Nixie”, recorded October 20, 2010.

At the outset, a caller introduces herself as a veterinarian who moved to Selinsgrove, PA (in central PA) 20 years prior to calling (so the period she encountered the words below must have been between 1990 and 2010).

She called in to ask about a few words she’d encountered among the local population which were novel to her:

This is a little more of a stretch, but I’m betting this also comes from German, from the German word nicht, which means no.
That’s when you have a cat or a child doing something they shouldn’t do, you say no! no! no! or nicht! nicht! nicht!. And it’s directly related to nix in English.

The host is somewhat of an expert of English and etymology (the point of the call-in show), but here he explicitly notes he’s speculating.

However, the caller did also present doppic as sourced from the same local speakers, and by most accounts this indeed a direct borrowing from German.

In any case, his theory that it derives from nicht aligns very well with the nichts-nutzes account from The Pennsylvania Dutch Alphabet given above.

Enter if you DARE

That said, the host of the podcast is still speculating in his answer (and as @Janus Bahs Jacquet points out in the comments, even taken at face value, it still demonstrates some unfamiliarity with German), so I wanted to find a more professional reference.

The go-to work for such questions is the Dictionary of American Regional English, aka DARE, which does have an entry for nixie².

Unfortunately, it is of no help in this particular case, as the glosses are only tangentially relevant:

¹ This statement is anecdotal based on my experience as a native speaker of AmE (NYC based), as well as the comments of others in this and similar topics around the web, and the fact that I had to search hard to find sites which even discussed this word, let alone give an account of its origins.

On top of that, none of the several dictionaries I checked using OneLook listed this sense of the word. Most redirected to straight nix, and the rest listed unrelated senses (muses, water sprites, illegibly addressed mail, etc).

In the name of scholarship, however, I did a search in both the Corpus of Contemporary English (COCA) and Google nGram Viewer, and both show nixie (so spelled) is virtually unused in [written] English, particularly not contemporary [written] English, and when it is, it’s used in an unrelated sense (Nixie tubes mostly, then water sprites, then a proper noun / given name Nixie).

² Sadly, despite coveting it for years, I don’t have access to this work, but user @njuffa graciously provided the contents of the entry for us in the comments.