In an answer to the recent question, What is the American equivalent of a "backie"? site participant Chappo notes that in Australia the word dink is sometimes used as a noun to mean "a lift on a bicycle" and the verb dink can mean "carry a person on a bicycle" (both definitions provided by Oxford Living Dictionaries online). OLD has this very brief source note:

A term familiar in Australian English but not widely used most other parts of the English-speaking world is dinkum. G.A. Wilkes, A Dictionary of Australian Colloquialisms (1978) gives two entries for dinkum:

The entry for the verb bunk cited twice in the definitions above identifies it as a 1950s Australian slang term meaning "to carry someone on one’s bicycle crossbar" and later a 1980s+ term meaning ""to travel without a fare, to get in (e.g. to a cinema) without a ticket."

My question is this:

What evidence (if any) is there of a possible etymological link between dink (the bicycle ride) and the earlier dinkum (either in the adjective sense of "authentic or genuine" or in the noun sense of "work, toil")?

I think a relevant clue about dink is that its earliest uses appeared to be the longer phrase double-dink, where the “double” refers to two people on the same bicycle.

The earliest citation in GDoS is in verb form from 1914 and uses “double dink”:

Motor Cyclist Takes Passenger On Carrier. Falls Off. Passenger Hurt, Law Stops Double Dinking. What To Do— See Dom Riley’s Side Cars, £5 To £40.

That the phrase originated as “double-dink” offers an alliterative clue as to why the slang “dink” caught on, although not a complete explanation.

Double-dink, to carry a second person on the top bar of a bicycle. It is also a noun. Exchangeable terms are ‘dink’, ‘donk’, and ‘double-bank’, both as verbs and nouns.

The variant “donk” is interesting, as the phrase “double-donkey” can also be found used to describe two people riding together on a bicycle or a horse.

Of course, this instance of “double donkey” comes later than GDoS‘s earliest citation of “double dink,” but the context of the use suggests to me that perhaps riding “double donkey” was a slang term earlier than is recorded in print that I’ve been able to find.

Interestingly, this clipping from 1924 suggests that double donk was not only in use in the United States as well at such an early date with reference to riding an animal, but also that it appears to have been a relatively established expression:

Remember when we used to ride “double donk” on the farm? Here is “quadruple donk.” 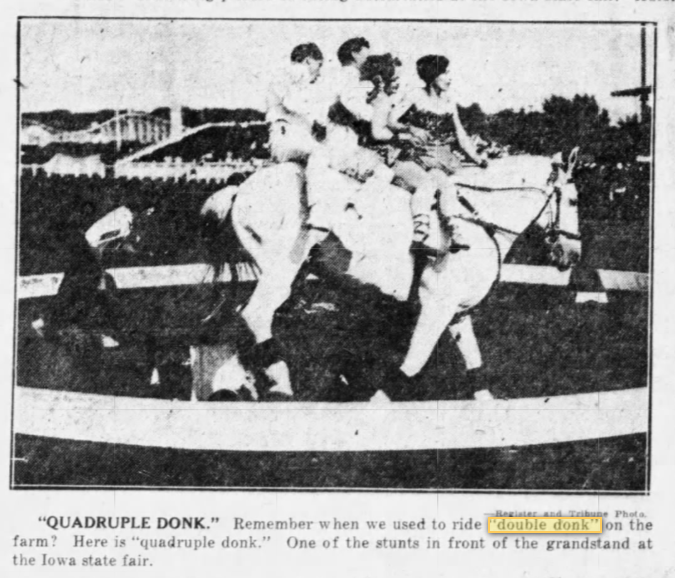 Based on this evidence, I’m inclined to speculate that “dink” meaning a ride on a bicycle is simply coincidental to “dinkum” as Australian slang. It appears to have originated as an alliterative slang “double-dink,” which may or may not have derived from the phrase “double donkey” which has a more obvious literal derivation.