The quieter you become, the more you are able to hear.

Further, is this a proper sentence? Is there an implied verb?

Theirs is by no means the earliest exploration of the phenomenon, merely the first publication of the name that we of late give to this peculiar construction.

These constructions are found in virtually all languages (think French Plus ça change, plus c’est la même chose), and even in English they have been around since time immemorial: 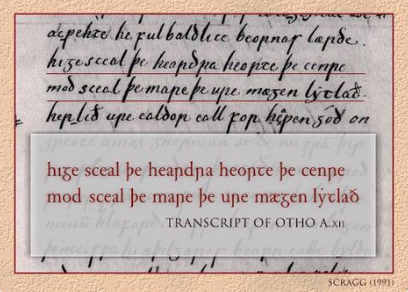 That’s an image reproduced from D.C. Scragg’s The Battle of Maldon, published by Manchester University Press, containing Old English text from more than a millennium ago reading:

See the Wikipedia article on the The Battle of Malden for more about the ancient poem.

In her 2013 lingistics PhD thesis from the University of Maryland, “Grammar Deconstructed: Constructions and the Curious Case of the Comparative Correlative”, Heather Taylor begins her abstract writing:

Comparative correlatives, like the longer you stay out in the rain, the colder
you’ll get, are prolific in the world’s languages (i.e., there is no evidence of a language that lacks comparative correlatives). Despite this observation, the data do not present a readily apparent syntax. What is the relationship between the two clauses? What is themain verb? What is English’s the which obligatorily appears at the start of each clause?

You should use her bibliography listed there to chase down further scholarly inquiries.

As for whether it’s a “proper” sentence or not, let me quote John Lawler, who said all that needs to be said about this back in 2014 much better than I ever could:

It’s certainly an utterance, like “Ouch!”. And it has a parsable syntactic structure (mostly consisting of deleted constituents, which is normal for idioms) and a clear contextualized meaning. So calling it a sentence won’t cause any trouble, unless Sister Juliana insists on seeing the verb.