From the mid 19th century to about the mid 20th century, there were a lot of advertisements in newspapers and magazines for something called odd pants. Judging from context, I suspect they were not just “unusual,” which is what one would likely infer from “odd pants” in casual English today.

It almost seems as if “odd pants” was as common a term as “work shoes” or “dress pants” are today. 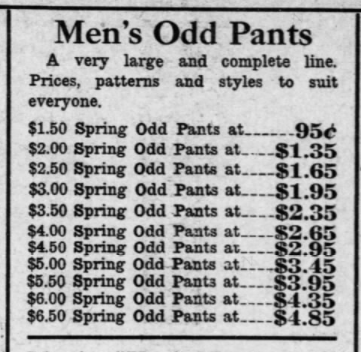 The term is not in the OED or other dictionaries I consulted, and most of the instances I’ve found “in the wild” are from this time period ranging from about 1850 to 1950, mostly in advertisements that don’t provide a lot of context for understanding what “odd pants” are.

So what exactly are “odd pants?” Why are they called this? Is there a reason the term grew into and then fell out of favor so quickly? Is the term or any of its variations still used today, and I’ve simply been missing out?

odd pants, in that they were not part of a suit (coat pants with or without vest)

Growing Up: Childhood in English Canada from the Great War to the Age
of Television (Themes in Canadian Social History)Aug 16, 1997 by Neil
Sutherland google books

“For Hugh Palmer’s ‘Sunday best,’ his father ‘bought me a pair of black
Oxfords to go with my blue serge suit. How I hated that suit. The
short trousers, or “stovepipes,” were unlined, and the serge was a
particularly rough sort – no doubt designed to cause maximum chafing
just above a boy’s knees.’11 In Cedar Cottage, one man explained,
boys’ Sunday outfits ‘weren’t suits, you know … odd pants and some
gloves, a shirt or something … but they weren’t too fancy clothes at
that…”

It appears that after the great war, clothing factories sprung up specializing in just [odd] pants, to the chagrin of complete suit manufacturers.

“One of the most popular styles of the odd pants was the very loose
white flannel trousers. They were worn by men who were extremely
class conscious and wanted to visually remove themselves from the less
financially fortunate. In The Great Gatsby, Nick describes that for
the lawn party he “dressed up in white flannels….” The two other
kinds of odd pants worn by men were the trousers called Oxford Bags
and knickers.” Google books: Fashion in the Time of the Great Gatsby

And now … just pants. Whereas men would own many suits, they now own a suit or 2, 5 or so sport jackets and numerous pants with odd and varied patterns, colors etc. And … definitely a number of pair of khakis.