Is it just a small percentage of the population in that region who stress the first syllable, or is it widespread?

In other words, if I visit such a region will I find almost everyone talking like that or is it something restricted to a certain neighbourhood?

Shifting second-syllable stress to the first syllable is characteristic of Southern (US) accents. Indeed, it’s a trope, reaching #59 on the Stuff Southern People Like blog:

The THANKSgiving pronunciation is also covered in a Language Log post which also mentions ADult and UMbrella among others.

The association is borne out by at least one famous study, the Harvard Dialect Survey, started by Bert Vaux and Scott Golder in 2002. Joshua Katz, a Ph.D. student in statistics at North Carolina State University, created a series of maps using that data that made the rounds on social media last year thanks to the New York Times. Those pronunciations all sound unusual to me, but that’s because I’m SoCal through and through— in fact, not just SoCal, but downright OC.

Question 48 of the survey addresses umbrella, and while stress on the second syllable predominates throughout the U.S. (76%), the distribution of UMbrella is clearer when looking at the full results: 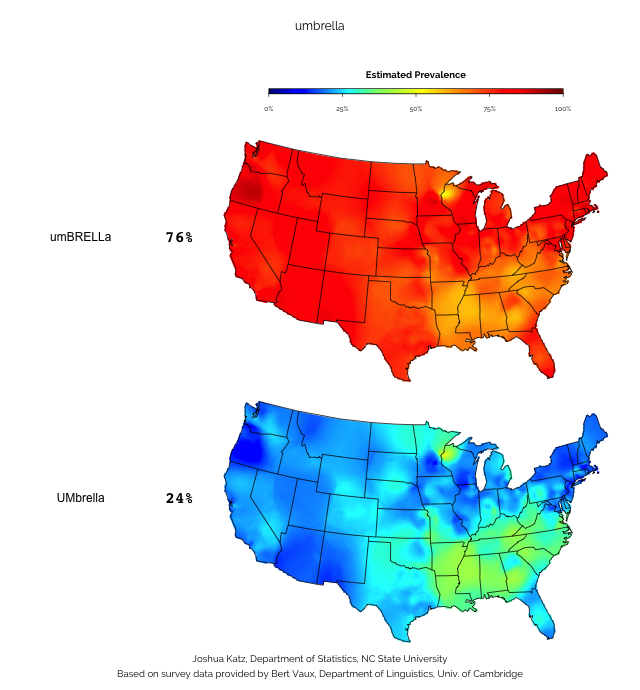 The survey also attests to INsurance and THANKsgiving. It is seems strange, however, that not even Dixie can agree on how to pronounce the quintessentially Southern pecan.

According to Macmillan, stressing the first syllable of adult is characteristically British whereas stressing the second is American, although I do hear the first-syllable stress commonly in the U.S. as well. As with the Southerners, however, this too seems to be word-specific. The dictionaries draw no such distinction for TV.