As the title says – why frogs?

A common answer is that the French eat them – but I’m not convinced by that, because it’s only become specific to France in recent times, with the rise of gastronomy and tourism (both in the 19th century).

I have read versions that the epithet was first applied to inhabitants of the low countries, who were marsh-dwelling, then became applied to others like Jesuits and eventually the French. The clearest is linked from this question – but there is no source for the information, no indication of where that may be recorded, and it also mention non-existent frogs on the Paris coat of arms.

Has anyone got better documented origins for the word?

According to the French newspaper Le Figaro, the reason has to do with a neighborhood across from Paris called La Grenouillère:

La Grenouillère or more precisely La Guernouillère [low river marsh
where frogs congregate] for the natives who lived along the river was
a small hamlet on the [then] “outskirts” of Paris, facing the
Tuileries Gardens, which became known in the 18th century for the high
quality of its washerwomen and laundresses who carried out their
labors by “the weight” or “item of clothing”. These hamlet dwellers
spoke what was certainly a lowly patois, which the upper classes of
the time found comical. The “language of la Grenouillère” became a
symbol of the naive good nature and the liberties of speech of the
Parisian lower orders.

This manner of speech gained visibility in the 1750’s through
Jean-Joseph. Vadé’s famous Letters from the Grenouillère, which
later gave way to numerous imitations. This “Parisian patois” was very
useful in particular at the time of the 1789 Revolution, when some of
the pamphlets penned by aristocrats used it as a didactic weapon
against the foul-mouthed Louis Jacob Hébert in his rag Le Père
Deschenes.

Be that as it may, in 1790-1791, not only those living in La
Grenouillère but also, by assimilation, all the people of Paris were
being called “the frogs” by the court nobility….Undoubtedly, this
generalization reflected the influence of Aristophanes’ play The Frogs
on educated aristocrats. The action takes place mythologically on the
banks of another famous river: the Styx! In short, at the Court of
Versailles in 1791, the opinion of Parisians, the humor that reigned
among activists in the capital, could be summed up in the oft-heard
question, “What do the frogs have to say about this?”

With this phrase in tow the most realistic of these aforementioned
privileged persons escaped abroad. In the face of human anger,
absolute pessimism is a must; this was borne out many times in the
19th century and Rohmer’s film The Duke and the Englishwoman recently
illustrated the need for fleeing.

Thus, the most clairvoyant of these nobles ended up in London where
their émigré community spread the term “Frogs” throughout the English
aristocracy. These very ravaging frogs that continued to grow bigger
than cattle and soon more predatory than wolves,[…]

[The article goes on to say to say that the revolution was forgotten but that the epithet remained…..]

The moral of my song is that best name is the name we give ourselves.

the real story of froggies

///
TRANSLATION: In France, during the Revolution, the frog, which was rare compared to other animals such as the cat, dog, pig, ass, chicken or turkey was thus more used by the counter-revolutionaries than by the patriots.

Below is a painting by Alexandre-Jean Noël of the place known as la Grenoullière, on the left bank of the Seine, facing the Tuileries Quay 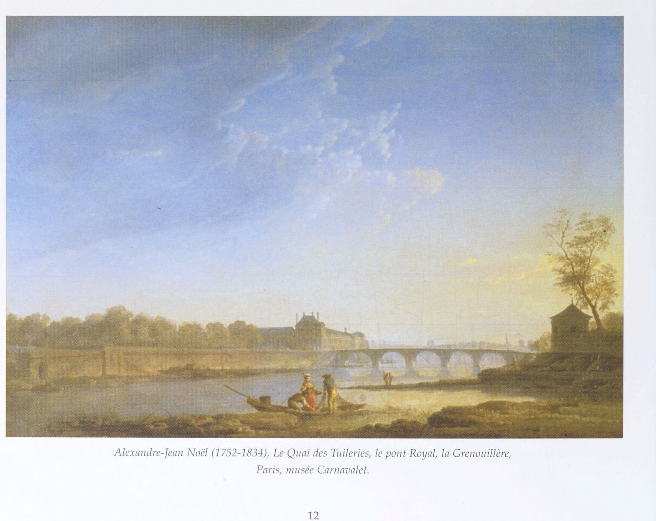