Why did this happen?

My question is not meant to be broad or a request for subjective opinions. Instead, I mean to ask whether there are any obvious objective factors that explain or could explain such a decline, such as a documented change in the meaning or connotation. I am not a native speaker and do see any possible factors at all, so I hope that native speakers can shed some light.

My understanding is that the expression “if you shall/should” roughly means “if you have/had a duty or obligation to,” and I am puzzled as to why the expression became so much less used to express the idea. I see nothing wrong or weird in saying, “I will help you find another apartment and relocate to it if you shall vacate your current landlord’s property by the end of this month.”

In an attempt to find the answer, I looked at statistics for the expressions “you should” and “you shall” (i.e., without “if”). I found that although the use of the latter expression considerably declined since the 1700s (by a factor of 10), the use of the former one did not decline at all: Graph. Thus, the statistics of “you shall/should” cannot explain the magnitude of the decline of the use of “if you shall/should.” And I even do not see why the expression “you shall” became less frequently used than before.

I am puzzled and humbly hope to read enlightening responses by native speakers.

Update: As pointed out by JK2 in an answer below, the statistics are different if we replace “if” by “If” (i.e., if we make the first letter capital):

In the transition into and out of Early Modern English, so really a very long time ago, people would write if you shall with the modal shall followed by some verb in its plain form to convey the same sense where today we would omit the modal altogether. The following all mean essentially the same thing:

Number 1 is completely obsolete, while number 2 is quite stuffy and formal but hardly obsolete. Even number 3 is a bit wordy. Number 4 is the ordinary way to express that today.

On pages 313 and 314 of The History of Scotland: During the Reigns of Queen Mary and of King James VI. Until His Accession to the Crown of England: with a Review of the Scottish History Previous to that Period; and an Appendix Containing Original Papers, Volume 3, we find two examples of this construction in a letter from Queen Mary dated the Twelfth of September of the year 1566. (Because that year is from before the adoption of the Gregorian calendar, it would, I believe, be the Twenty-Third of that same month according to our current way of reckoning such things.) 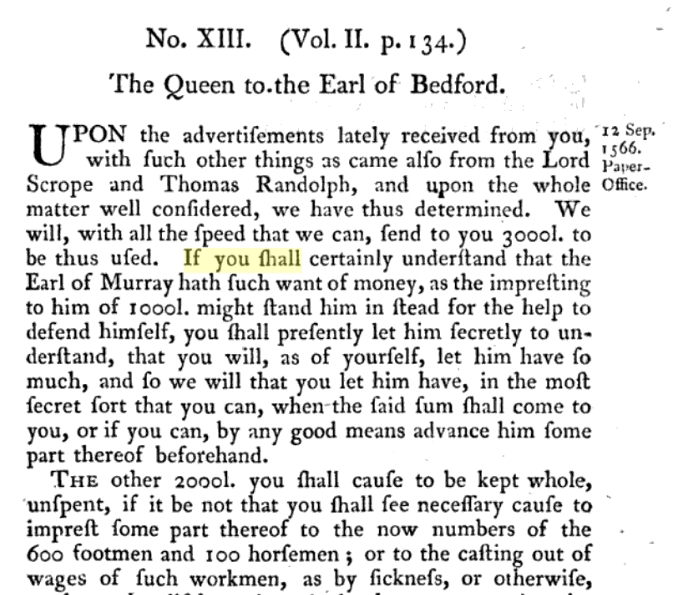 The salient sentence is this one: (Yes, it’s really just one sentence!)

If you shall certainly understand that the Earl of Murray hath such want of money, as the impresting to him of one thousand pounds might stand him in stead for the help to defend himself, you shall presently let him secretly to understand, that you will, as of yourself, let him have so much, and so we will that you let him have, in the most secret sort that you can, when the said sum shall come to you, or if you can, by any good means advance him some part therefore beforehand.

Today we might start that saying: If you come to understand with certainty that…

The second example occurs in this sentence from the next page: 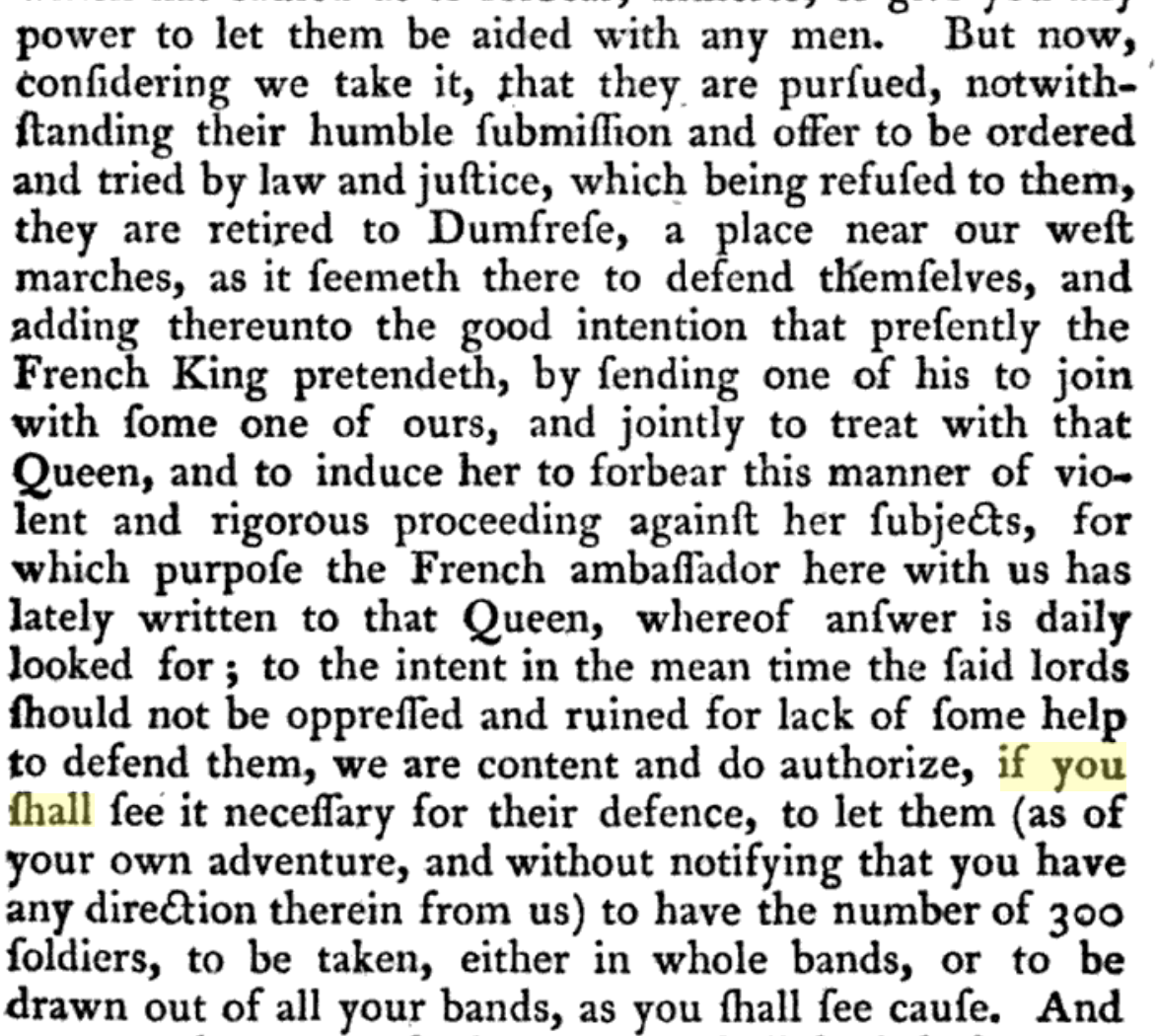 Where that sentence is:

But now, considering we take it, that they are pursued, notwithstanding their humble submission and offer to be ordered and tied by law and justice, which being refused to them, they are retired to Dumfrese, a place near our west marches, as it seemeth there to defend themselves, and adding thereunto the good intention that presently the French King pretendeth, by sending one of his to join with some one of ours, and jointly to treat with that Queen, and to induce her to forbear this manner of violent and rigorous proceeding against her subjects, for which purpose the French ambassador here with us has lately written to that Queen, whereof answer is daily looked for; to the intent in the mean time the said lords should not be oppressed and ruined for lack of some help to defend them, we are content and do authorize, if you shall see it necessary for their defence, to let them (as of your adventure, and without notifying that you have any direction therein from us) to have the number of 300 soldiers, to be taken, either in bands, or to be drawn out of all your bands, as you shall see cause.

In other words, If you see it as something that’s necessary for their defence, we authorize you to…

Again, this if you shall style of writing conditionals passed out of common use for what we today use just the plain present tense for without a modal, or on rare occasion via if you should (happen to) ….

I hope it is clear that we no longer write the way they did back then. 🙂